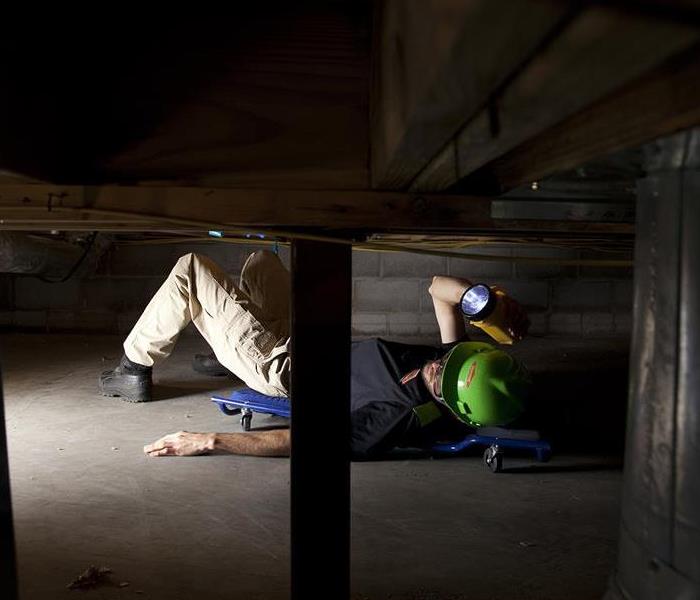 Park Cities, TX refers to the town of Highland Park and the city of University Park, the home of Southern Methodist University. Ted is an example of a conscientious homeowner living in Park Cities. His HVAC condensate drainpipe on his older home emptied next to the foundation. After doing some research, Ted learned that constant water dripping near the foundation could produce mold and mildew in the crawl space, creating an unhealthy environment. The moisture could also wick into the concrete slab.

When Ted discovered evidence of peeling paint and some slight mold and mildew on walls of his basement, he decided to extend the drain pipe away from the home’s foundation. He only needed to extend the pipe about ten feet away from the house because the slope of the yard would keep the water from doing any further damage. The project took up most of a Saturday morning and involved the entire family, including Ted’s four-year-old son Ethan, who loved to play in the dirt.

Ted and his family dug a trench deep enough to keep the water in the pipe from freezing in the winter and to keep the pipe sloped so that the water would flow freely. When the job was finished, Ted admired the steady stream of water flowing from the pipe.

Up to twenty or more gallons of water per day can flow from a standard HVAC system. Hot weather, a filter clogged with dust and animal hair, and dirty coils can make a system work harder, which means even more daily water production. However, an annual HVAC inspection and a monthly filter replacement kept Ted’s system in peak condition.The pipe extension project proved successful, and there was no more peeling paint, mold, mildew, or musty smell in the basement.

Four-year-old Ethan was fascinated by the constant flow of water coming from the drain pipe. Over time, he began to worry that there was too much water, and he did not want all the water to drain out of the house. Trying to be helpful, he plugged the end of the pipe with dirt, small stones, paper, plastic, and sticks. Finally, Ethan stopped the water flow, and he was pleased with his success.

When Ted began to see water streaks in the ceiling, sheetrock damage along the walls and baseboards, soggy carpeting, and a buckling floor, he knew there was a leak. He discovered the leak in the attic around the HVAC system, where the drip pan was overflowing and likely had been for quite some time. By the time an overflowing condensate drip pan is discovered, the damage is already done. Hundreds of gallons of water can leak into the ceiling, walls, and flooring of a home over the period of a few weeks.

Ted called a local HVAC technician to thoroughly inspect the unit. The technician saw that the filter, coils, and drain pan were clean, and the pipe did not appear to be clogged with mold or algae. A check of the drain pipe in the yard revealed the dirt, stones, sticks, and debris that were the source of the clog. When the plug was removed, the pipe gushed water.

While the clog was discovered and resolved in only a few minutes, the water damage to the home was extensive. The water damage, the structural damage, and the presence of mold and mildew required expertise, training, and equipment that only a Park Cities water damage restoration specialist could provide.

Every water damage scenario is different. Whether the cause is a local flood or a leak in the home, each incident requires a unique solution tailored to the specific situation. However, the overall water restoration process remains the same. The steps below detail the SERVPRO restoration process for the typical water-damaged property, including an HVAC water damage situation.

The team at SERVPRO of Park Cities will coordinate with the insurance company for the entire process, reducing stress and bringing peace of mind to the property owner.

SERVPRO of Park Cities has emergency 24-hour service and is “faster to any size disaster.” The experienced, highly-trained professionals deploy the latest extraction, removal, and drying technologies. Locally owned and operated, SERVPRO of Park Cities is a trusted leader in the water damage restoration industry.

For more information about water damage restoration, visit the SERVPRO of Park Cities website at https://www.SERVPROparkcities.com. To speak with a SERVPRO representative, call (214) 522-3000.